Here she is, my Ginger skirt! 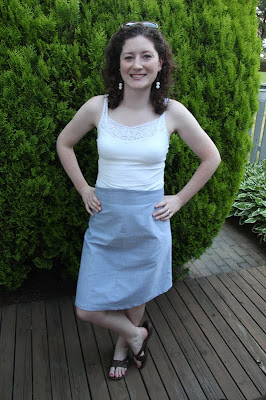 She took way longer than I expected to complete, mostly because I didn’t have as much time to work on her as I wanted.  The Ginger was pretty easy to put together, but again I struggled because I chose a fabric that looked the same on the right and wrong sides.  I somehow managed to mix up what side was what for the waistband, which delayed construction a bit.  I’m still not entirely sure that I got it right, but the skirt looks nice so I’m not going to worry about it anymore. 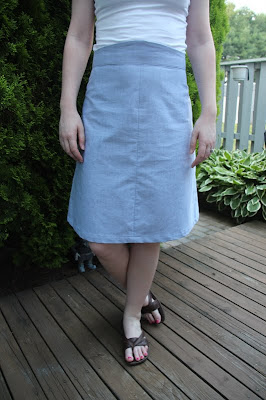 When I made up the muslin, the hips seemed a wee bit too tight, so I used a French curve to slightly grade out the hip area by borrowing from the inch seam allowance that I was using.  When I tried on the skirt after it was all put together except for the hem, I thought the fit was pretty good.  It seemed a tad too big, but I figured only I could tell because I saw it when it was a tad too tight.  So I proceeded to hem the skirt.  When I tried on the finished product, it was obviously too big.  Instead of taking out the entire hem, I took out the hem around the side seams and then pinched in the excess from the side seams.  I probably ended up taking out as much as I added in.  Good times.  I think the finished product looks pretty awesome! 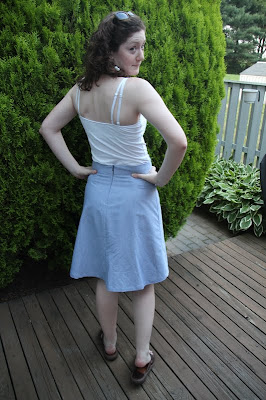 And check out the inside, which looks just as pretty as the outside thanks to Mr. Nilsson. 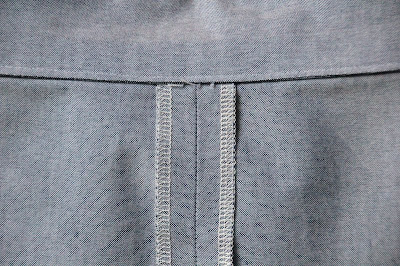 Mr. Nilsson threw a wrench in things early on in the construction process when I accidentally broke one of his needles, didn’t realize it, and then continued to serge the front panel seam.  When I went to press the seam open, I was puzzled as to why there were perfectly incremented pulls all of the way down the seam.  Apparently that’s what a broken needle will do to chambray!  Thankfully I had enough extra fabric to cut the two front panels again.  I am so glad that I cashed in all of my credit card points to buy Mr. Nilsson. 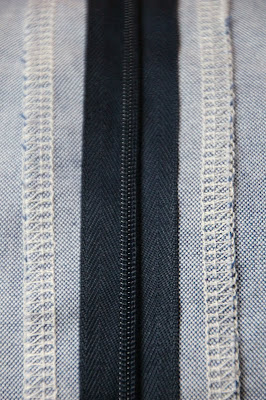 The shirt that I had planned on wearing with the Ginger didn’t work out because its button-down front was a little bulky under the high waistband.  I was forced to wear this white tank to work, but since it has spaghetti straps I had to wear a black cardigan over it.  I must say that the Ginger is super comfortable.  I survived a day at work without it feeling tight or restricting, including a long walk to eat lunch at Bobby's Burger Palace (I highly recommend the Crunchburger and a black and white milkshake if you find yourself in University City).  I was surprised at how good the skirt looked after a full day of wear and train riding.  I purposely didn't iron her before we took pictures when I got home from work and there was only mild wrinkling from sitting down.  Bonus!

I definitely need to invest in a different top to go with this skirt.  I’m just going to have to whip up a Pendrell!  I’m thinking a sleeveless version this time (not to mention the correct size too).  What color do you think I should use?
I’m thrilled that I've been finishing all of the projects that I’ve been working on.  Next up is my Crescent skirt!
Posted by Lindsay at 7:00 AM

I love to receive your comments and try to respond to all via email. 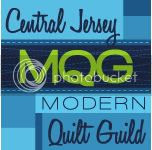 Get this widget at roytanck.com